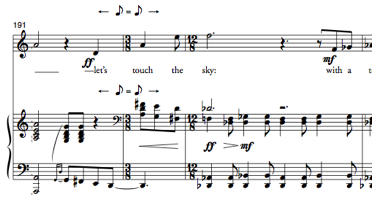 seven poems by e.e.cummings for natural voice and piano — 1974

For my one and only song cycle I chose seven of cummings’s less avant garde poems for my treatment with pastiches of various styles of popular music and jazz, from bossa nova to boogie woogie. Among others I’ve doubtless forgotten, there are direct references in the piano part to records by the Beatles, Dave Brubeck and David Bowie (at least twice). I was fairly free with the material, but one thing I did pretty strictly was to invert the music for every part of the text in (parentheses): I wrote the melody I would otherwise have written, then turned it upside down.

My designation ‘for natural voice’ is due to my general dislike of the classically trained voice. That doesn’t mean I’m entirely opposed to vibrato, but there’s vibrato and there’s vibrato... Nevertheless, it needs a highly accomplished singer and a pianist to match, with a good feel for the popular idioms. The voice doesn’t absolutely have to be female, but my instinct is that it would work better than a male voice.

The first lines of the poems are listed below. I’m hesitant about including the entire poems here because of copyright issues, but the owners of the sites I’ve linked to for each poem don’t seem to be particularly bothered, so you can read them all on line...

Vocal music is a problem when making MIDI recordings. It’s impossible to include the words in any satisfactory way without having someone sing them. For lovesongs I recorded the vocal line with a trumpet sound, then tried recording myself either whispering or murmuring the words along with it, but it just came out sounding sinister — maybe OK for horrorsongs (or for Ashes to Ashes), but not for lovesongs. I also tried modulating the vocal recording with the trumpet sound and vice versa, but that simply sounded robotic, like a vocoder (Mr Blue Sky this ain’t). So in the end I opted to keep to an instrumental rendition, changing mutes according to the mood of each song: open, cup, open, harmon, open and bucket respectively for the first six, and changing the instrument to flugelhorn for the last. The setting is nearly all syllabic (one note per syllable), so you can follow the words fairly easily using the links above, or in the score itself in the YouTube video. In the intro to the fourth song, may i feel said he, the singer should go ‘t tss-t, t tss-t’ etc. in imitation of a hi-hat, so I’ve been really adventurous and used a hi-hat instead.

This piece was published in 2000 by a small company called Micropress-Spiral, but the company only lasted about a year, so if anyone’s interested in trying — or indeed publishing — this piece, please contact me.

This is the identical recording twice, the choice being offered in case of technical hiccups on either of the ‘mother ships’. Note: these two players will run simultaneously, so unless you fancy a double dose (out of sync) of my ‘spiritual output’, I recommend that you take care to avoid this happening!

This a computer-generated mockup of music entirely or partially for ‘real’ instruments. Clearly it is no substitute for a live performance, but it’s all I’ve got — or perhaps all I can make public for various reasons. There’s a fuller disclaimer on the Listen page.

...with a sneak preview of the score